When Asha Dangol from E-Arts Nepal informed about the International Art Camp II 2018 in Solo, Indonesia, we (Bidhata and Sushma) both were very much excited as this could be a great opportunity to meet and share ideas among artists form different countries. Since Bali is one of the tourist attractions we did not want to miss the chance, so headed to Indonesia 5 days before the art camp starts. we find Bali similar to the Kathmandu valley in the way that it has maximum population of Hindu and many temples around the city. Greenery, discipline traffic, architectures and cultures attracted our attentions. After visiting famous temples and some other tourists destinations we headed to Barobudha – the biggest Buddhist temple in the world. 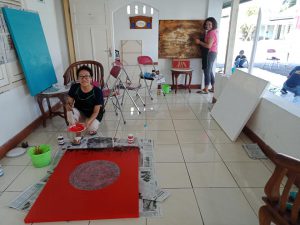 After that we headed to Solo  for the International Art Camp II 2018. In airport we met Hadi. Though it was my first meeting with him, his friendly behavior made the journey comfortable and easy going while staying in the camp. The venue of the camp was SASONO AGUNG JUMANTORO, it’s a military camp where historical buildings are located.

Commander of International Art Camp II 2018 was KRHT. Sulistyo Hadinagoro. All the national and international artists were warmly welcome by KRHT. Sulistyo, his entire family and many volunteers. The Camp was inaugurated in the evening along with welcome dinner party among some local important guests.

The everyday schedule of the camp was well arranged. Besides creating art work, certain hours were arranged for personal presentation. This presentation helps to know more about each and every artist’s creations, styles, and knowledge. Another interesting part of the schedule is cultural event. Everyday a group of performers from kids to senior artists would come to perform their various cultural dances. Every evening a musical band would entertained us which were also joined by interested artists to show their multi talent through dances and songs. These activities helped to create a quick bond among all the artists, organizing team and volunteers together to a new family at Solo.

Long and wide corridor was arranged with extra shade outside for our working place. This was very comfortable to move around and see each other working. Every artist was given two canvases to express themselves. Most of the artists chose painting, other chose mixed media, photography, clay work and performance too. The exchange of ideas, finding of new techniques and styles, interaction and discussion move even deeper as one is practically creating art just in front.

“Cultural Parade” was another interesting part of the camp. In that Parade all participating people (mostly) dressed in their national attires. The parade was followed by various teams of cultural dancers, players, government officers, artists and many more. 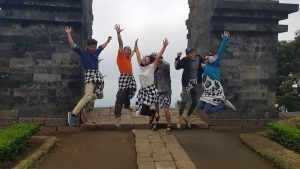 “Children Art Competition” was another important event organized during the Camp. During this event children not only got a chance to express themselves but also got an opportunity to see national and international artists working in different styles and interacted with them.

Museums tour was additional informative program arranged during the Camp. First we were taken to “Museum Mansusia Purba Sangiran”  – Sangiran Museum of Ancient Man. Before we were engaged to see its collection we were given full information through slideshow and catalogue about its collections and contribution in human study. This helped visitors to comprehend its collections. This Museum displays fossils of early humans, ancient animals and other ancient items. Museum Keris Nusantara, Solo was the second museum we visited. The second museum has a huge collection of Keris. Keris is a stabbing weapon and the history of using this particular weapon goes back to the 9th century and at the present time spread in many Southeast Asia. Though Keris looks a simple weapon its significance among Indonesian people is immense. The museum also displays spears, sword and some other weapons from different parts of Indonesia and Southeast Asia.

The most important event of the Camp was exhibition of the artworks created during the camp. The exhibition took place in the gallery at Balai Soedjatoko, Bentara Budaya Solo on 16th August 2018. Mayor of Solo city, Director of Arts, Director General of Culture, Ministry of Education and Culture Republic of Indonesia, police military commander Solo city, air force commander of Solo city, lecturers and student from Solo Institute of the Art and artists and art lover from Indonesia all gathered during the opening of the exhibition. Each participating artist was acknowledged by medal and certificate.